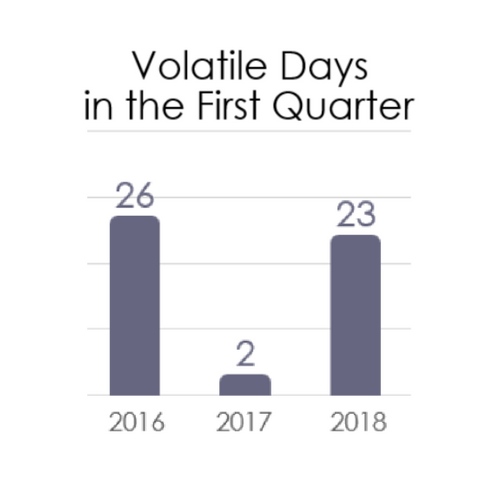 Long-term investors know that periods of volatility will occur every so often, just as airline passengers recognize that turbulence can disrupt an otherwise routine flight. Since the beginning of the year, there has been an increase in volatility in the U.S. stock market.

From January 29 to February 8, stock prices fell 9.92 percent (as proxied by the Russell 3000 Index). The market rebounded out of correction territory on February 9, but rough weather returned at the end of the month when the market rattled investors with a significant drop in stock prices and a nor’easter storm played havoc with air travelers with stomach-churning flights that mirrored the financial headlines.

Rapid drawdowns will happen, but we can gain perspective by considering that these declines are normal and expected. From 1979 through 2017, about half of the years had declines of at least 10 percent at some point during the year.1 Even with these momentary drops, 33 of the 39 years had a positive total return over the full year.2 Since we cannot predict which days will experience a decline, the goal for investors is to stay the course and continue to invest according to their plans, knowing that despite short-term losses, equities have delivered positive returns over the long term.

Overall, during the quarter, most asset classes remained relatively stable. Emerging markets led the way, up 1.42 percent, followed by U.S. stocks, which were down 0.40 percent.3 Fixed income and global real estate were the lowest-return asset classes, down 1.46 percent and down 5.52 percent respectively.4

Regardless of the noise made by many volatile days that overshadowed the quarter, diversified portfolios that include equities and fixed income did not change significantly in value from January to March because U.S. stocks are just one of the asset classes included, which means the rise or fall of the U.S. stock market is not the sole determinant of a portfolio’s value.

In June 2017, The Telegraph talked with two pilots about the day-to-day reality of dealing with turbulence. British Airways captain Steve Allright summed up the experience in this way: “Every day I fly, I expect a small amount of turbulence, just as I’d expect the odd bump in the road on the drive to work. Turbulence is uncomfortable but not dangerous. It is part of flying, and it is not to be feared.”5

Frequent flyers understand that the occasional bumpy ride is part of the process of getting to their destination. The same applies for investors on the road to achieving their long-term goals.

5 Telegraph Travel, “How Far Do Planes Fall During Turbulence – And Where in the World Is It Most Common?” The Telegraph, June 19, 2017.