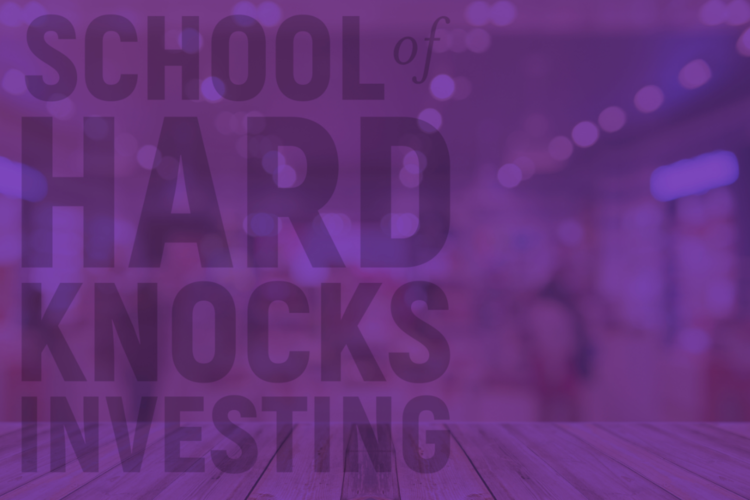 All four episodes of School of Hard Knocks Investing are now streaming on Apple Podcasts and http://schoolofhardknocksinvesting.com/.

If you enjoy the show, share your comments with a review or rating. If you like the series, please subscribe and tell a friend about it.

Episode One: The Fallout From All Those Shelters

“I don’t think you get wisdom, which I hope I have some at this point in my life, unless you’ve had several sort of learning moments. What I’m trying to do and what I want to share with the audience is what those learning moments mean and maybe help people not make the same mistakes.” — Norm Mindel

“I think it’s so different now in terms of the [investing] choices that you have, and there’s so much more transparency and accountability. But that feeling still certainly a lot of people have and is kind of justified from back in the day.” — Dave Goetsch

Investing by the decade…first stop, the ‘70s. Dave and Norm discuss investing in the late 1970s when Jimmy Carter was president, Johnny Carson was the host of “The Tonight Show” and the Bee Gees were all over the Hot 100 Billboard chart. The United States was dealing with the fallout from the oil crisis and a stock market that showed no signs of life after a significant market decline in 1973-1974. Talk about learning a lesson on free markets.

“Somebody once described it as you’re essentially investing in humanity. If the world ends, you’re not going to do very well.” — Dave Goetsch

Crash, boom, bang! The sounds of Wall Street in the 1980s. Dave and Norm discuss the years leading into the 1990s, which provided more than one defining moment in financial history. They recall what it felt like to live through the market crash of October 1987 and the days when Japan emerged as a

n economic force to be reckoned with before the bubble burst. When the neon landscape eventually faded to flannel, the door was open for asset allocation and a disciplined approach to investing. With the help of a globally diversified portfolio, finishing is winning.

“If your portfolio has no volatility in it, something’s wrong.” — Norm Mindel

“There’s a different way to invest that doesn’t make your head explode and you’re not going to have to watch CNBC all the time and read The Wall Street Journal unless you want to do it for pleasure. There’s a whole different way to go.” — Dave Goetsch

Under pressure. In the late 1990s, we were on the verge of an internet bubble that momentarily taught people the meaning of fly by night. Investors were taking big risks on individual stocks and untested (and sometimes unstaffed) internet companies. A sock puppet dog going door to door to deliver pet food? Dave and Norm discuss the tech bubble, Y2K and the years leading up to the financial crisis. In the topsy-turvy ‘90s and ‘00s, bubbles were bound to pop.

Episode Four: A Lot of Meaning and a Lot of Impact

“I can’t imagine retiring … I don’t golf, so what am I going to do?”— Norm Mindel

In 2008, the market was going bananas. Before that time, people viewed homeownership as the unshakable bedrock of middle-class society. Dave and Norm look back at the financial crisis and the dramatic effect it had on investors. At a time when waiters were touting their million-dollar real estate transactions after reading the day’s specials, hindsight is 20/20 the market was on course for an adjustment. Dave and Norm consider the crisis, the comeback and the power of investors to persevere.

If you enjoy the show, share your comments with a review or rating. If you like the series, please subscribe and tell a friend about it.