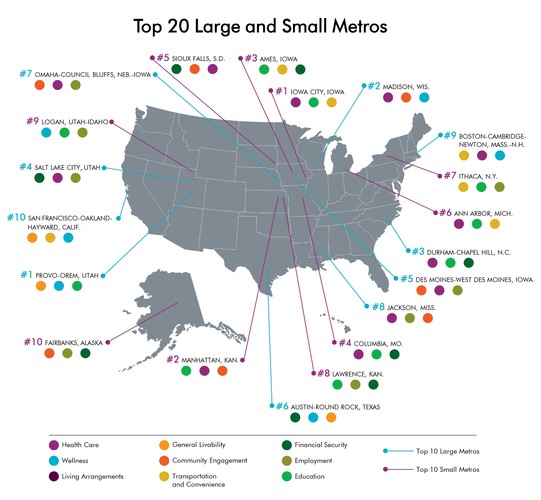 The question of where to live represents one of the most important decisions retirees can make because where they live ultimately influences how they live. The answer to this question may initially be fueled by financial considerations, but choosing a location is not just about cost of living.

Retirees should seek to settle in a community where they have access to quality health care, numerous social activities and opportunities for education and employment while still living an acceptable and comfortable distance to family, especially grandchildren. Of course, spending in retirement remains an important consideration.

A 2013 study by Marlena Lee, PhD found that overall spending decreased because of changes in certain spending patterns.1 Although leisure spending and medical care spending tended to increase, work-related spending tended to decrease in retirement. Specifically, leisure spending increased on sports and hobbies, trips and vacations, charitable giving and tickets to entertainment events while out-of-pocket spending on medical care increased across all income groups as people age.

Making the Decision to Move

Moving is rarely a pleasant experience. Inevitably, there is not enough time to pack up all the belongings and carefully secure the valuable items we manage to collect after even just a few years living in a house. If it happens to be a lifelong home where children were raised or one that has been within the family for several generations, it can be difficult to contemplate moving to an entirely new location.

Memories of the past have put a stop to plans for many a move. However, when we set aside emotions, it is easier to acknowledge that a house is just that and the attachments we feel may be less about the physical structure and more about the people who spent time in the house. The first step is to consider the benefits of finding a new place versus staying in the current house.

These six scenarios may be compelling reasons to make the decision to move.

1. The house is no longer appropriate for the occupants (too small, too large, difficult to access floors above and below the main level).

2. The neighborhood does not have convenient services and amenities to accommodate current needs.

3. Friends and family have moved to other areas.

4. The house is a constant reminder of a loved one who has died.

5. The house is in need of frequent repairs and ongoing maintenance.

6. The house is no longer pleasant to live in.

No one should take on the process of moving without asking for assistance from family, friends and professional movers. While it may be daunting, the rewards that come with making a fresh start are well worth the time and effort.

States With No Income Tax or No Inheritance Tax

With respect to financial considerations, cost of living in different cities can vary dramatically. For example, some states do not have any income tax, which can be a significant driver for retirees who have large IRA withdrawals, pension distributions or plan to work part-time. In addition to the sunshine, states such as Florida and Texas attract many people because they have no inheritance taxes and no state income taxes. However, some of the savings gained from living in these states may be offset with higher real estate taxes.

For example, if a retiree had earnings of $100,000, would living in a no-income-tax state make sense if the real estate taxes were $20,000? It would be financially better to pay 5% income taxes and pay $5,000 in real estate taxes. While this is a purely financial calculation, it is an important factor that can make retirement more affordable.

Estate taxes can also be a major consideration for individuals who are able to decide where to live and plan to transfer their wealth to their children. For many retirees, varying inheritance tax rates are a compelling reason to live in one state over another. For example, Washington has a relatively high estate tax rate of 10%–20% while Connecticut has an estate tax rate of 7.2%–12.0%. Retirees may be required to prove residency, and some states have a complicated and rigorous process for determining primary state of domicile.

Returning to the example of the $20,000 of real estate taxes, this is a 20% fixed cost and poses significant challenges in managing retirement. These fixed costs go up not by inflation but by the need of the taxing body to raise revenue. While taxes are an important component of deciding where to reside, they should be weighed along with different quality-of-life factors that ultimately define the lifestyle and environment that someone wants to experience.

Consider These Quality-of-Life Factors When You Near Retirement

The third edition of “Best Cities for Successful Aging” from the Milken Institute Center for the Future of Aging ranked hundreds of metropolitan areas.2 The 2017 report looked at a range of characteristics to identify communities in the United States that are actively creating age-friendly environments where retirees can thrive.

It is worth noting that the Milken report stands out when compared with other best-city surveys. Instead of merely ranking as best places to retire, the communities on the list are building with “a broad focus on livability across the life course.”3 Here are a few highlights from that report.

The infographic provides a snapshot of the top 20 cities (top 10 large metros and top 10 small metros) and their top three quality-of-life factors. 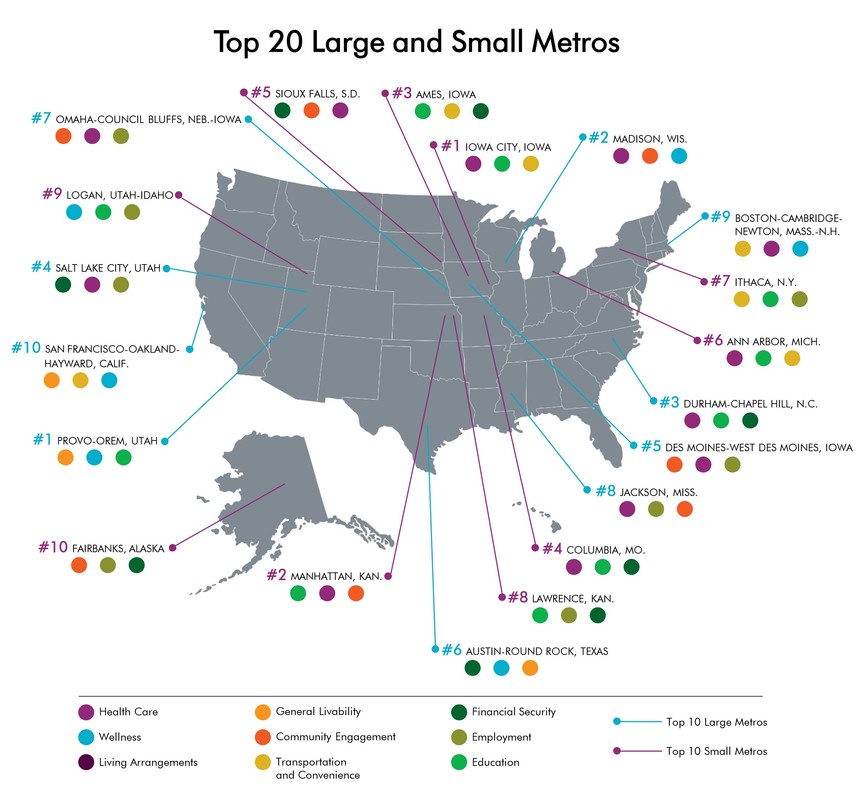 The Milken report used a detailed methodology to determine its 2017 rankings. According to the report, “Ranking criteria and indicators were identified through examination of peer-reviewed research, other relevant research and reports, news articles, and expert interviews. The indicators reflect age-friendly characteristics and priorities cited by these sources that can be measured and reported on through publicly available data.” The authors used weighted variables to create the final rankings, and “weights were developed for the indicators that make up each category and for the nine categories that make up the composite index.” Metros were ultimately evaluated as follows: “The category scores are combined based on category weights to provide an overall score and rank.”